Don't forget to check out the main site at www.f-stopimages.co.uk

After a brief break to start an MBA and look after our lovely 3 month old daughter Martha, i'm now giving the photography some focus again. I was in Cornwall last week with the family and managed to get some shots of the coast line i was pleased with. Really good to be out with the camera again. Watch this space for more photos coming soon....

2012 has flown by. Now into the final few weeks of the year and it has been a blur on all fronts.
Photographically I have set myself all sorts of challenges this year, from learning new techniques with off camera flash to getting to grips with using 10 stop filters.
This year the blog and website has really got off the ground as well. This has been a great motivator for getting out and getting new images and to really try and improve the quality of what I have been producing.

Ansel Adams is famously quoted as saying “Twelve significant photographs in any one year is a good crop” I’m not sure I could claim to have produced any ‘significant’ photos but I thought I’d share twelve that have stood out for me in 2012.


So that's the round up of my year in twelve pictures.

Imogen Cunningham once said “Which of my photographs is my favorite? The one I’m going to take tomorrow.” If this year has been great for photography I’m sure next year will be even better. That favorite photo is just around the corner.

Lots to write about but no time this evening. Had a great weekend in Cornwall photographing some friends Climbing South Face Direct at Chair Ladder. I also had some time to play around with a 10 stop ND filter. More detailed report to follow on using this filter and on the climbing photo shoot... 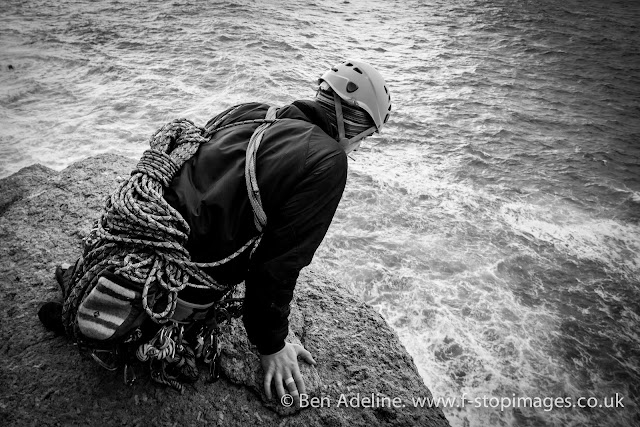 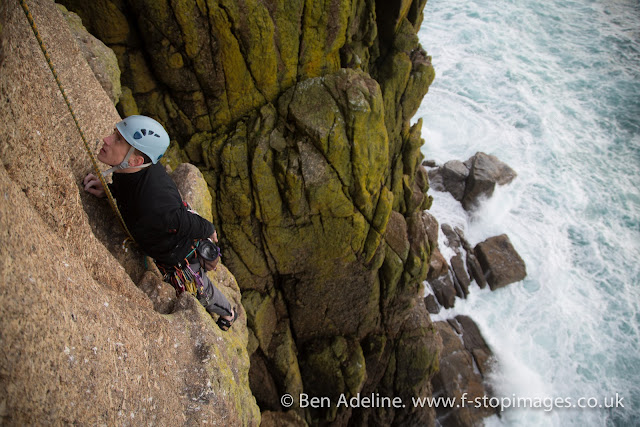 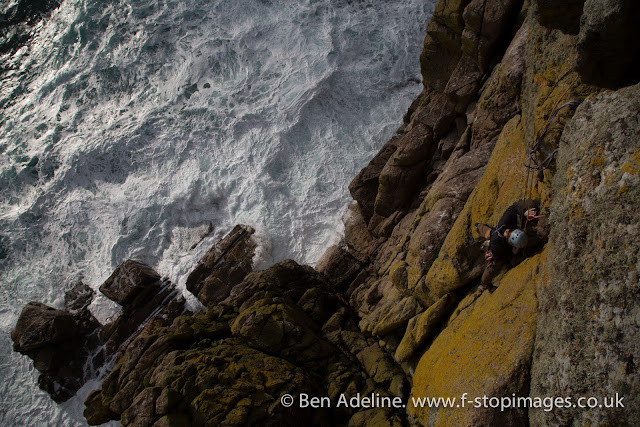 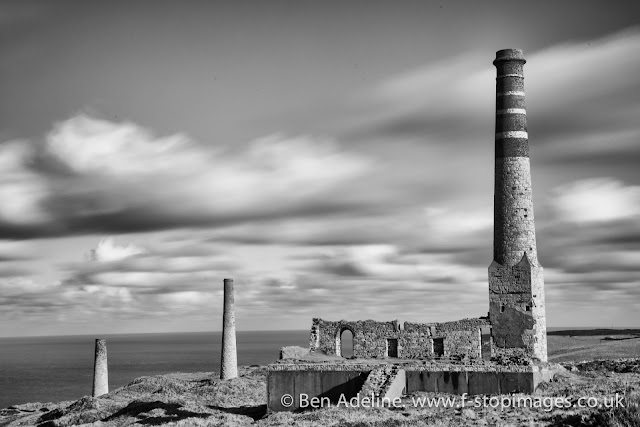 A few final preps this morning before the doors open at 12:00. Come and visit us at 14 Stanbury Rd, Bristol as part of the Art on the Hill event..
Posted by Unknown at 00:54 No comments:

I'm now putting together the final preparations for the Art on the Hill (www.artonthehill.org.uk) arts trail next weekend (6th+7th Oct). This is a great event in the Victoria Park/Windmill Hill area of Bristol. My good friend Sam Gilraine has been kind enough to share her house with myself and potter Bill Moore so there will be plenty worth visiting at this venue alone! (Venue 13, 14 Stanbury Rd).

I've printed and mounted a selection of climbing, mountaineering, landscape and cityscape images which will all be for sale at very reasonable prices! I've also produced a large 100cm x 50cm Bristol panorama which i'll be selling as a limited edition.

If you are in the vicinity it would be great to see you there! 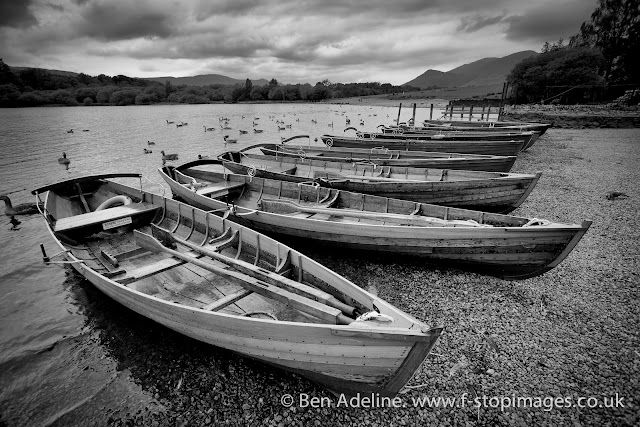 The final (and very late!) instalment of Alpine Dispatches. We are now safely home and the trip seems like a distant memory already.

Having recovered from the amazing trip up the Chardonnet we decided on one last objective, the traverse of Les Courtes. This is part of the ridge line and series of peaks that includes Les Droits and runs up towards L'Aiguille Verte. We did investigate the Verte but were advised that no one had done it recently as the Whymper couloir was out of condition and the Moine ridge had too much snow on it. 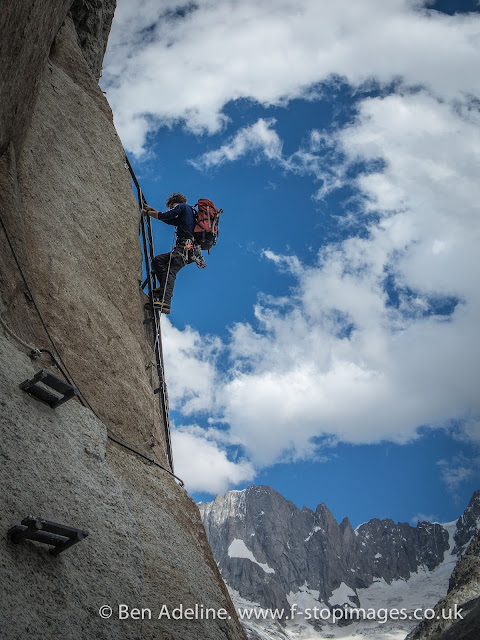 We left the valley for the Couvercle hut after lunch and seriously underestimated the walk in. We thought it would be a quick jaunt up the Mer du Glace then hang a right and your there.... Well kind of but with a lot of moraine and boulders to cross and a steep series of ladders to climb followed by a good final approach to the hut. A four hour trip that left us exhausted. In fact the walk in isn't too bad but we were both surprised how exhausting we found it. This was the first indicator that the trip was talking it's toll and we were running out of energy (no matter how many energy gels we were knocking back!).

The Couvercle hut is the finest i have stayed in so far. The remote location above the Telefre Glacier makes it feel very isolated from the outside world. Inside it is very traditional and almost chalet like. Over dinner the radio crackled into life and everyone went silent, at first we thought it was an emergency broadcast but then realised it was just a weather forecast. There was something very surreal about this. In an age of mobile phones and internet it was strange to be with a hushed group of people listening to someone broadcasting over a crackly radio, it could have been an Antarctic hut 100 years ago! 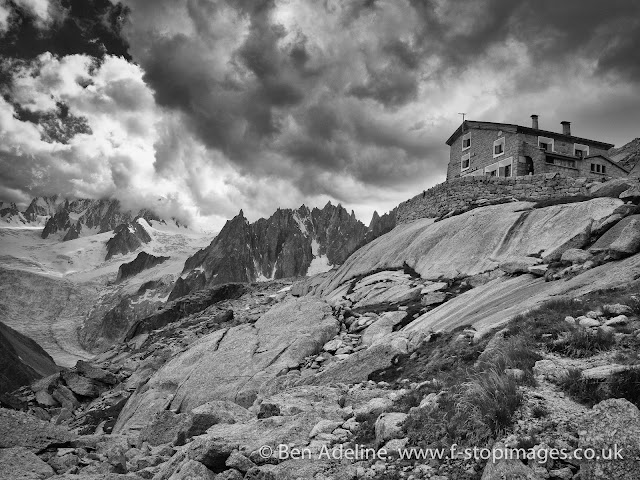 We set off the following morning at 02:00. Another ridiculous start. we made good time heading up the Talefre Glacier to the base of the snow slopes that head up to the the Tour du Courtes. We started up the progressively steepening slope, picking a way around, through and across crevasses and bergschrund before reaching a steep snow slope. It was getting light by this point and our progress had started to slow considerably. We traversed the slope very tentatively, the snow was in terrible condition. 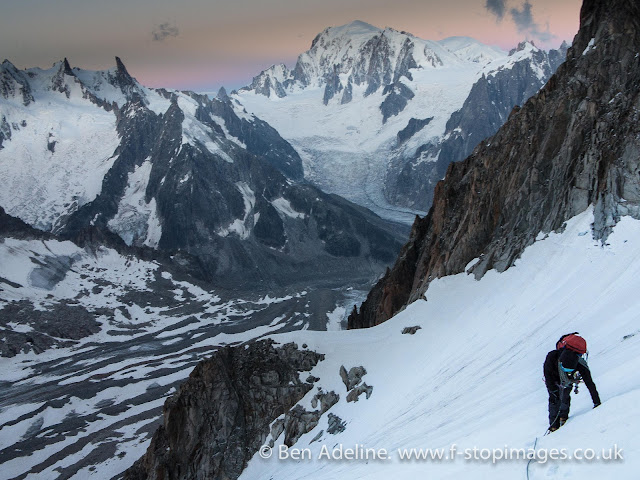 Having made it to a small rock outcrop in the centre of the slope we stopped to take stock. We were both knackered. Looking up to the Col Superior we could see the strong wind swirling the spin drift off the summit ridge and dark clouds starting to build. After a short deliberation we decided to call it a day and head back. Although the forecast was good for the day the wind looked too strong for tackling the exposed and committing ridge that lay ahead. Our energy levels were a concern as well. It had taken almost two hours longer to get to our high point than it should have done. If anything were to happen we would have been too exhausted to sort ourselves out, in this remote area it would almost certainly result in a rescue.

Defeated but sure in our decision we started down climbing and began the long walk out to the Montenvers Railway at the bottom of the Mer Du Glace. 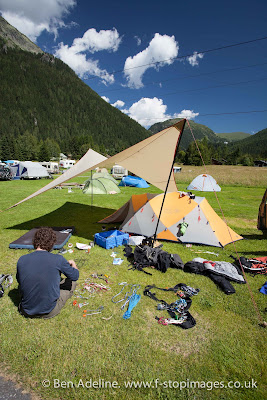 Back in the valley the following day we sorted all the gear and decided that we were done climbing mountains for the trip. We had planned to try and tackle Mont Blanc, not particularly because of it's mountaineering appeal, but because we wanted something on the list that folks back home would have heard of. We spoke to Jack and Matt two other english guys on the campsite who the previous day had been up the Gouter route. They backed off due to the wind but their description of the route and conditions didn't really inspire us so we felt we weren't really missing out.

The decision was made to head north to the relaxed sandy woodlands of Fontainebleau for some bouldering. Neither Ollie nor myself had been there before so it would be a good way to break up the journey home as squeeze in some more rock. Leaving the valley we tapped in Font into the satnav slightly concerned we had no guide book and no idea where to go other than the (what turns out to be) large city of Fontainbleau. 10 minutes out of Cham, we saw Jack and Matt heading in the same direction. They had mentioned going to Font so we tucked in and followed behind them for 5 hours. Fortunately it turned out they were going in the same direction and led us to great campsite not far from the 'elephant' area. 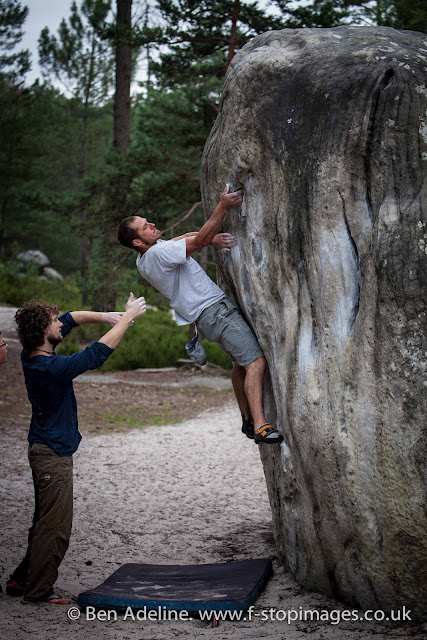 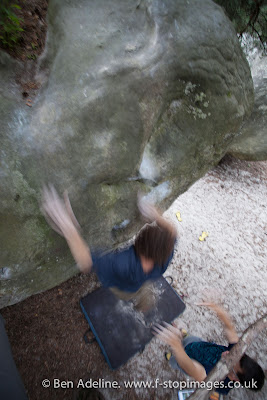 We climbed all day on the thursday following some of the circuits and tackling a few individual problems. Walking back to the car Jack turned his phone on which started beeping with missed calls, answerphone messages and texts. This is when we heard about the avalanche.

Relatives back home had seen the news of the large avalanche on Mont Maudit and thought the worst. I had been quite conciencous through the trip in updating Lou as to when we were going to be on the hill, out of contact or in the valley. Having left the alps though i had switched off (both the phone and mentally!). I felt terrible when i found out everyone had had a fraught few hours worrying whether we had been caught in it. Later that night we heard the terrible news that British guide Roger Payne was amongst the nine people killed that morning.

This more than any of the scary moments we had experienced in the past two weeks really gave me pause for thought about alpine climbing. Roger was a good friend of my other climbing partners family and had done a lot of guiding for them. He was extremely experienced and on a fairly straight forward route when the avalanche happened. If this could happen to him really could happen to anyone out there.

The unpredictable nature of the objective risks in the alps is one of the reasons the climbing there is dangerous. The objective risks are high which forces you to move quickly to minimise your exposure to things such as avalanche and rock fall. By doing this though you increase the subjective risk, the factors you have influence over such as the amount of protection you use, whether you pitch or move together. We learnt a huge amount this year and  think we really did push ourselves which gave us a huge sense of achievement.
I'll definitely be back to the Alps for some more adventure but the more experience I get with this style of climbing the more considered i am about the level of risk i find acceptable. This trip made me feel i was nearing my peak in pushing my personal boundaries. Not limited so much by technical difficulty but more by my acceptance of the inherent danger and an increasing awareness of the implications if things did go wrong.

Let's see what next year brings. 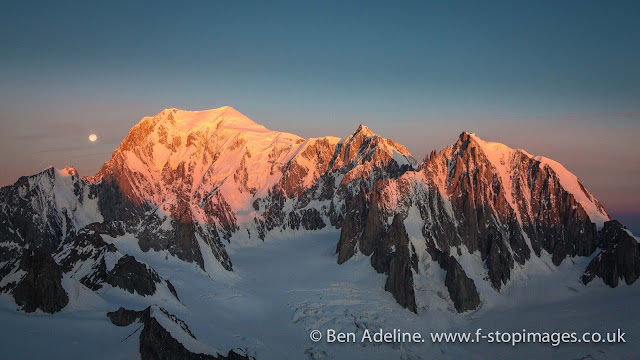 Just a brief update... We've had a few concerned messages from people hearing the news about the avalanche on Mont Maudit near Mont Blanc earlier. We left Chamonix yesterday due to the uncertain forecast and being totally exhausted!  We're now climbing at Fontainebleau near Paris before heading back to the UK tomorrow.

Check out the main f-stopimages site:

I'm a Bristol (UK) based photographer with a passion for travel and adventure. f-stopimages.co.uk showcases some of my work and travels both in the UK and around the world.

I endeavour to take photographs that convey a spirit of adventure whether the setting is an evening at the local crag or an expedition on the far side of the globe.

All of my images are available to buy as prints or mounts, I also produce limited edition framed prints of some of my favourite work.

I am available for commissioned work and am always willing to discuss ideas for adventurous photographic projects.

You can also view my work on my Flickr page www.flickr.com/people/fstopimages.